BUY MORE, SAVE MORE - on Supercircuits and HD Vision Gear


Supercircuits will be closed on Monday, 5/30 in observance of Memorial Day. 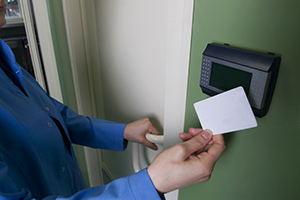 Access Control System – An interconnected set of controllers that manages the entrances and exits of secure areas, granting or denying access to individuals.

Access Level – An authorization level or security criteria that must be met before access to a secure area is granted.

Access Point – A point of entry into a secure area, typically managed by a door controller and a card reader.

Anti-Passback – An access control security measure that prevents a Cardholder from passing his or her access card to an individual behind them, and allowing them access into a secured zone.

Anti-Tailgating – The term “tailgating” refers to instances when one person swipes their access card and another person or vehicle “tailgates” them on the entry. Anti-Tailgating is an access control security measure that will not allow a Cardholder to exit a Zone that they never entered as a valid credentialed user.

Bit – A bit is a ‘Binary Digit’ in the binary numbering system that will have a value of either 0 or 1.

Biometrics – A machine readable technology that identifies individuals based on reading biological features such as retina scans and fingerprints.

Buffering Capacity – Refers to the amount of information (such as users, time of day, etc.) the access control system or door controller can store.

Card Encoder – A device that’s used to encode information onto an access card.

chips and key fobs— used to gain access to a location.

Door Strike – A plate mounted on the door jamb to accept and restrain a bold when the door closes.

Door Switch – A type of switch that communicates whether a door is open (switch open) or closed (switch closed).

Electric Door Strike – Door unlocking hardware that’s installed in the door jamb and works with a mechanical lock or latch mechanism. An electric door strike can be connected to a door controller which can power the strike and other door peripherals.

Event – In access control an event is an occurrence at a controller that generates a message stored by a controller that can include locking or unlocking a door, a request to exit or other type of recorded event.

Fail Safe Door – A door that will unlock automatically in the event of a power failure to permit entering and exiting through the door.

Fail Safe Lock – An electric lock that is locked when the power is on, but automatically unlocks when there is a power failure.

Fail Secure Door – A door that automatically locks during a power failure, preventing anyone from entering, but allowing them to exit during an emergency.

Fail Secure Lock – An electric lock that is normally unlocked when the power is on, but automatically locks during power failure.

Flex Channel – A flex channel is an input channel on a security digital video recorder (DVR) that can be configured to support either an analog or IP video stream, providing complete flexibility to connect either an analog or an IP camera to the DVR, and to switch the video input at any time.

FlexVR™ – Unlike traditional hybrid DVRs, which offer a pre-determined number of analog and IP channels, DIGIOP FlexVR™ Hybrid DVRs can be configured to support any combination of analog and IP video streams—within the total number of channels supported by the DVR. Channels can be converted to support either analog or IP cameras at any time, and all channels are pre-licensed and fully enabled—delivering the ultimate in system flexibility and cost-effectiveness.

Form C Contact – A type of relay or switch (often referred to as a single pole double throw or SPDT), that contains three connections: normally open (NO), normally closed (NC) and common.

Magnetic Contact – A device that sends a signal when the magnetic field between two monitored access points is broken.

Magnetic Lock (Mag Lock) –A locking device that consists of an electromagnet and a strike plate that works in conjunction with a mechanical lock or latch mechanism, and uses electromagnetic attraction to lock and unlock a door.

Mustering – An access control software feature that quickly verifies where individuals in a particular zone at a location for easy tracking and identification.

Open IP License – DIGIOP’s Open IP License delivers a simple and cost-effective licensing structure for video recording solutions. All video channels come pre-licensed and fully-enabled, allowing users to add cameras as their system needs require (up to 32 channels per system), without having to purchase additional licenses. Licenses never expire and there are no recurring fees, minimizing total cost of ownership over the life of the product.

Peer-to-Peer Communication – Some IP-based door controllers in an access control system are independent of a network or PC work station and feature peer-to-peer communication which keeps data flowing, even if a server connection is interrupted.

Power over Ethernet (PoE) - PoE carries both power and data for the access control door controller and peripheral door hardware.

Proximity – A common access control card technology that uses radio frequency to communicate between a proximity card and a reader.

Proximity Card (Prox Card) – A access control credential that is encrypted with proximity technology and can be read by a proximity reader without having to physically insert the card into the reader, in order to grant a cardholder access to a location.

Proximity Reader (Prox Reader) – A device that can read encoding on access control credentials such as a proximity card or badge, and sends data to a controller to grant or deny access.

Request to Exit Button (REX) – A button that must be pushed to release the door in order to exit.

Smart Card – An access card that can be integrated with different technologies including biometric, magnetic stripe, proprietary proximity—and contain information about the cardholder.