BUY MORE, SAVE MORE - on Supercircuits and HD Vision Gear


Supercircuits will be closed on Monday, 5/30 in observance of Memorial Day.

Learn about the correct choices of covert video gear which are designed specifically to meet the field surveillance needs of law enforcement who are tasked with monitoring and securing parks and rec areas. Part 1 of 3 of a 3 part series.

Check out the links below to learn more about leveraging portable covert video surveillance.

For technology, there are several great choices of covert video gear designed specifically to meet the field surveillance needs of law enforcement. All of these can be placed into three main categories, trail cameras, video based devices and cellular based devices.

A fellow law enforcement professional, that I will leave unnamed, prefers to use law enforcement trail cameras because of the relative low cost and ease of deployment. On a recent deployment, he sought to capture the identification of individuals operating OHVs (Off Highway Vehicles) in a wildlife refuge.

He placed the Reconyx camera in a fire-break where the OHVs frequented, and although the trespassers never returned he was successful in catching criminal activity. As luck would have it, a marijuana grower decided to plant a crop within one foot of the Reconyx camera.

Allowing the marijuana production to unfold, he gathered countless photos which were useful in identification and proof of the activity. Needless to say, a full confession was easily obtained. 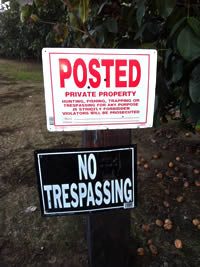 The same law enforcement officer using the Reconyx brand cameras is quick to recommend them but is equally quick to provide caution in their deployment. He has seen many simple, but costly mistakes.

For hardware security, a good trail camera will have optional accessories. Prime examples of the effectiveness of the security hardware, are the results obtained from a La Crosse County Sheriff’s Office deployment. Local intelligence revealed that marijuana production was taking place and in response they placed a trail camera in the vicinity. 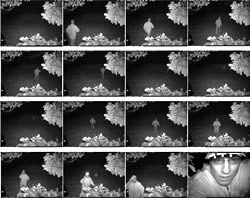 Fortunately the intelligence proved correct, but unfortunately the target identified the camera and attempted to remove and destroy it. However, the attempts by the bad guy to remove the camera were futile. La Crosse Sheriff’s Office circulated the acquired mug shot through local media and made an arrest one week later.

The concealment of trail cameras relative to other surveillance cameras is somewhat challenging given that nearly the entire face of the unit must be exposed to give clearance for the PIR motion detector, camera and infrared array. However, some clever folks have devised concealments, such as a fence post or warning sign, that are commercially available.

These concealments do an excellent job of masking the camera and, in a sense, are positioned in such an obvious manner that they don’t set off mental triggers to help someone recognize it as a camera. The results are impressive.